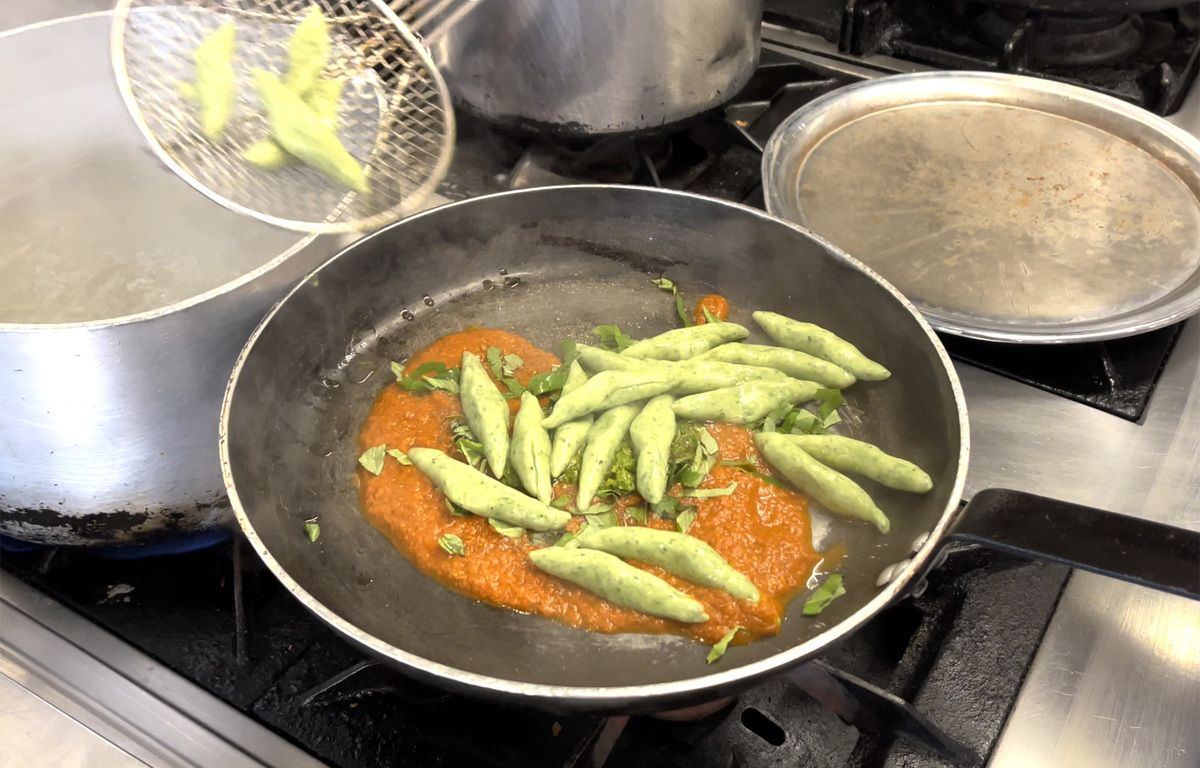 The French love pasta. Each year, 500,000 tons are consumed. Every Saturday noon, through its series “Pasta così! », 20 minutes teaches you how to cook your pasta well or introduces you to a recipe. Today, heading south, to Nice, where, thanks to the influence of neighboring Italy, there is no shortage of varieties. And the one we are going to present to you is particularly original.

On the side of the Promenade des Anglais, there are therefore not only stuffed foods, socca and pissaladière. There are also stewed ravioli, pasta with pesto and… merda dé (or di) can! Literally “dog shit” in Nissart. Yes, yes, that’s the name of these derivatives of gnocchi that are an integral part of traditional local cuisine.

With chard, a plant widely used in Nice cuisine

And if their name obviously makes you smile, their flavor certainly makes everyone agree. Made, like their cousins, from potatoes, they take on a green color thanks to the addition of chopped chard leaves. A plant widely used in local gastronomy (and even in a sweet version in a delicious pie). “It’s not for nothing that we nickname the Niçois ‘Li Caga Bléa'”, the cagues-chards, laughs Franck Viano, head of the Cuisine Niçoise collective.

Like gnocchi, the first mentions of which are found in the 15th century, merda de can also have existed for five centuries, explains the specialist. And even today, the recipe is passed down from generation to generation and is found above all on festive tables. Some pastry artisans still make them. “But few restaurants offer them à la carte”, notes Anthony Bastiand, the manager of L’Escalinada, an establishment at the gates of Old Nice which is a hit with this specialty.

Served with a tomato sauce, gorgonzola…

On site, the chef prepares the merda de can by hand, precisely to ensure that they regain their typical, ogival and irregular shape. After mixing wheat flour, mashed potatoes, chopped chard, egg, salt, pepper and olive oil, roll out the dough obtained into sausages about 1 cm in diameter. And detail them into small sections that must be shaped, one by one, between the palms. As for the gnocchi, then count 1 minute 30 of cooking in boiling water as soon as the pasta has resurfaced.

“We offer them with pesto [le pesto niçois], with a tomato and basil sauce, with gorgonzola, with Niçoise stew or even with a truffle sauce. But merda de can can also be eaten simply with olive oil and parmesan,” explains Anthony Bastiand.

“It’s original and also perhaps, thanks to the chard, a little lighter than the gnocchi”, slice, in the restaurant, Nicolas Barthe, a fan of this specialty.