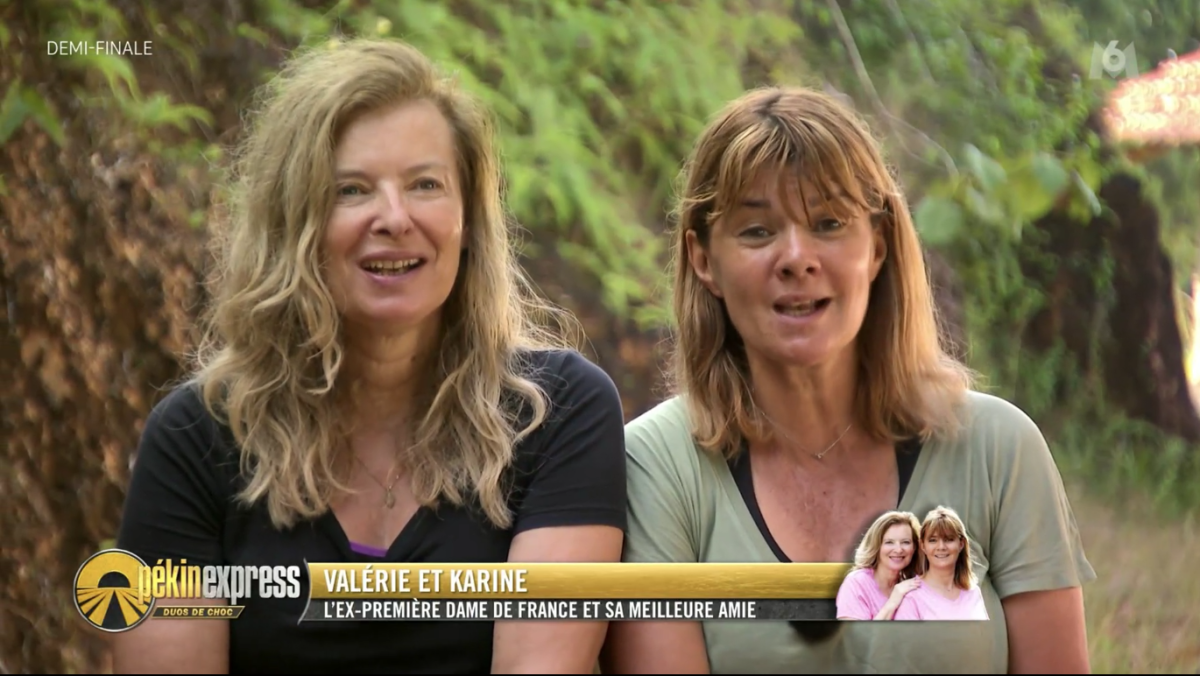 This Wednesday, August 3, on M6, the last three pairs of “Beijing Express: shock duos” compete in a decisive last straight line for the grand final. In this new unpublished episode presented by Stéphane Rotenberg, Rachel Legrain-Trapani and her companion Valentin Léonard, Inès Reg and her sister Anaïs and Valérie Trierweiler and her best friend Karine start three races, each more trying than the other. The tension and the pressure mount and some candidates do not hesitate to use tricks to save time. Like Valentin, the companion of the former Miss France, who misled the pair made up of Valérie Trierweiler and her friend. Enough to trigger the wrath of the former First Lady and Karine who marked the evening with their language … flowery.

“One episode, one insult”. The finish line is getting closer and closer for the remaining pairs of this new season of “Beijing Express: shock duos”. After the departure of Xavier Domergue and Yoann Riou last week, in the new unpublished episode broadcast this Wednesday evening on M6, Stéphane Rotenberg very quickly detailed the contours of the semi-final of the famous adventure game. The last three pairs, made up of Rachel Legrain-Trapani and her companion Valentin Léonard, Inès Reg and her sister Anaïs and Valérie Trierweiler and her best friend Karine will have to travel the roads of Sri Lanka again during three surface races. , underground and even underwater! In order to qualify for the grand final, the candidates will have to redouble their efforts not to finish last in each race, a situation synonymous with a black envelope, and therefore potential elimination. For its part, the pair who manages to finish a race in the lead will be awarded an amulet and 3000 euros for their association.

These are therefore three particularly complicated races which are reserved for the last pairs in the running. Rafting in the rivers of Kitulgala, treasure hunt in the forest, course on the land, in the sea and on the beach… naturally, the tension increases a notch and, as often in this program, all the shots are allowed! Last week, during an event, Inès Reg and her sister Anaïs penalized the pair Valérie Trierweiler / Karine by giving them the red flag. The former First Lady then had a reaction which sparked a controversy by launching “the s*lopes were waiting for us” to its rivals. The various events of this evening are not likely to change the image of the former companion of François Hollande. From the first minutes of the program broadcast this evening, Valérie Trierweiler, very combative, was quite virulent towards her competitors and chained the remarks: “Do we have the right to prevent them?” she launched when she saw a pair get into a vehicle from the start of the event. Later, while she was looking for a flag, the former First Lady came face to face with the pair made up of Rachel Legrain-Trapani and her companion Valentin Léonard. The latter deliberately misled the competing pair by pointing them in the wrong direction. “The bastard!” laughed Valérie Trierweiler, when she had just realized the trickery in the company of her best friend. Shortly after, while her partner managed to take a short lead over Rachel and Valentin, the ex-First Lady, vengeful, rejoiced by launching a “we’re going to fuck them!”. This language and this attitude of the journalist and ex-companion of François Hollande shocked many twittos.